Again and again we must rise to the majestic heights of meeting physical force with soul force. 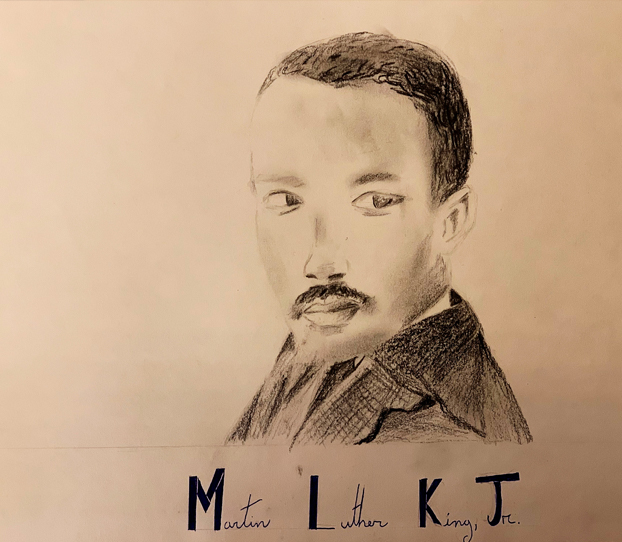 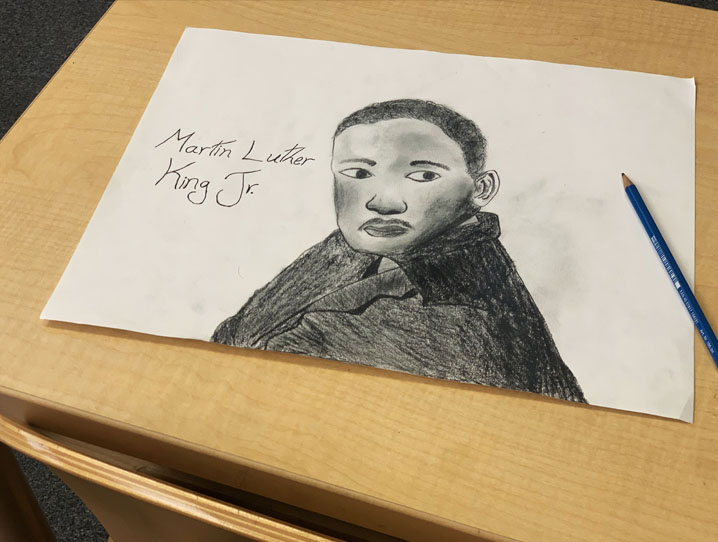 |||  In Sixth grade, Ms. Wolfe took up the theme of the Civil Rights Movement, as her class studied and acted out a Three-act play highlighting three pivotal moments from Dr. King’s life in the 1950s and 60s. Also featured in this dramatization were Ralph Abernathy, Rosa Parks, Robert Kennedy, and A. Philip Randolph, giving students a sense for the breadth of the movement. The students drew portraits of Dr. King as well.

In Eighth grade, Ms. Zutshi focused on the themes of soul force and creative suffering. The students read the I Have a Dream speech, and then engaged in creative writing exercises exploring how they can meet physical force with soul force, and also the meaning and implication of Dr. King’s words “You have been the veterans of creative suffering. Continue to work with the faith that unearned suffering is redemptive.”  We encourage you to check out these excerpts from the creative writing exercises down below. Eighth graders also drew portraits of Dr. King. 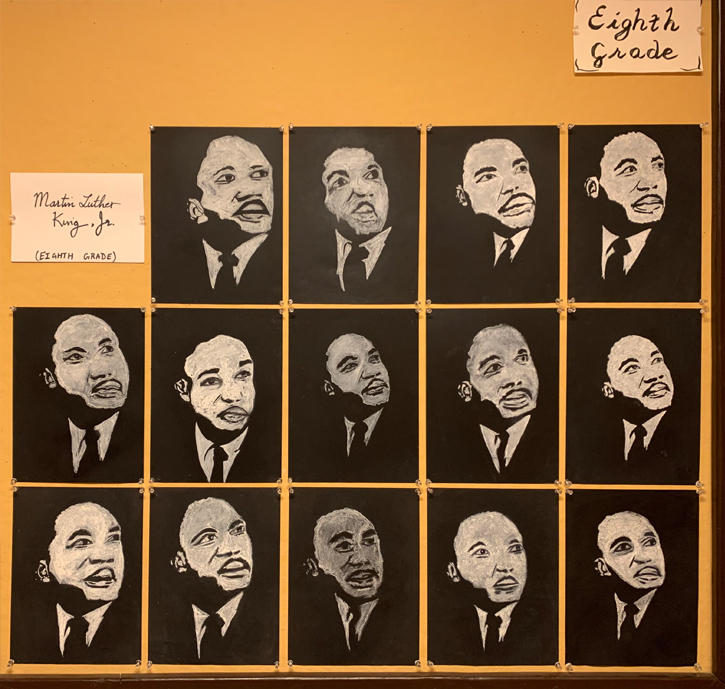 In Their Words: Creative Writing Excerpts from 8th Grade

1.  “Again and again we must rise to the majestic heights of meeting physical force with soul force.”

Students were asked to write about an incident that left them feeling angry or sad, whether they reacted or felt like reacting physically, and what they did or might have done otherwise.

“I wanted to throw the spoon across the kitchen. However, I didn’t because I didn’t want to get into trouble. Next time, I will take (the spoon) out calmly and put it away.”

“After losing two games in a row, I got so mad that I ripped the board in half…If I could do it again, I would have tried to realize I was mad after the first game, and not played the second one at all.”

2.  “You have been the veterans of creative suffering. Continue to work with the faith that unearned suffering is redemptive.”

Students were asked to write how they might have felt as a person in the crowd, listening to the speech. Would they choose the path of ‘creative suffering’?

“I don’t want to get hurt…but then I realize that this protest isn’t for me alone. It is for all of the Black people who are being mistreated.”

“I would definitely return (to the next protest) because I know that (King) would inspire me and help me.”

“…I can’t get the right opportunities now…but if I fight, maybe I can change the world for future generations.”

3.  Students were asked how they might respond if, 10 years from now, when they are working adults, the tap water in their house gets contaminated and is not fixed for three months.

“I would question the city’s effort to fix (the problem). I would then email a news company, detailing what was happening, and the city’s failure to fix it…to put pressure on the local government or face national backlash.”

“I would just leave, but I have so many connections to this place, plus I can’t even imagine the guilt I’d carry if I didn’t help resolve the situation.”

On a lighter note…

“The water has been contaminated for three months now…every shopping trip I take the house water fund – $30, but that only lasts two weeks…one day, I have an idea of how we could get water: filtering it from the nearby river.”

“I would ask my parents if I could move in with them.”