|||   Henri Ducharme has a peculiar energy for math that is hard to explain, but is most definitely contagious… just ask one of his students.

Mr. Ducharme fondly remembers his father, who taught him chess and math for many years. When Henri was a junior in high school, his father announced that he would not be able to work with him on calculus the following year, as he himself had only advanced up to trigonometry. “I remember going to my bedroom and crying… we had done math for years and years,” he says. As one of the first in his family to be a higher education graduate, he went on to receive his B.A. in Mathematics from Oberlin College. 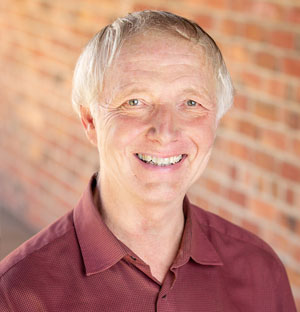 In our culture, there is often a distinction between creative disciplines on one side and the more practical disciplines–think math–on the other. Mr. Ducharme likes a fabled story that is told among mathematicians of the graduate student in math who did not have enough creativity to continue in his mathematics program, so instead he entered a program in poetry. He thinks that this story is accurate, and conveys that mathematics entails the highest level of creativity (or freedom). What attracts him most as a teacher is to come up with both surprising ways of how math works and how math is represented in everyday life.

Mr. Ducharme started out as a teacher of music, being himself a music student from age 5. He became a music director in a Catholic Church in East Oakland. One thing leading to another, the principal of a nearby school asked Henri if he would be the music teacher at that school. Mr. Ducharme taught there for a little while, when a mother of one of his music students asked him if he would tutor her son. Henri found this odd, as she had no idea that his background was in math. He agreed and spent the summer at the Ed Psych Library at Cal learning how to teach math. When he later worked out the numbers, he realized he had earned about 5 or 10 cents an hour that summer!

But, that early investment began paying dividends. Mr. Ducharme continued to tutor for nearly twenty years: working with advanced students in private and homeschool classes, as well as teaching after school classes in chess, computer programming, and engineering. Two decades ago he was the music teacher at both Marin Waldorf School and Novato Charter Waldorf. Mr. Ducharme joined Berkeley Rose in 2018 and, in collaboration with our teachers, has transformed our math program to be engaging, rigorous and creative for our students. We are so fortunate to have such an ardent enthusiast of mathematics and creative thinking engaging our students!

Below are a few videos that share his pedagogical process.

To Visit Us Please Fill Out an Inquiry Form Today!